First step of the RE_Lab program was carried out on May in Istanbul with participation of Herkes İçin Mimarlık, designtrak and Repairs Club from Turkey and Todo Por La Praxis architecture collective from Spain. After the meeting and interchanging of working principles of the collectives, project site is selected. After the examination of some quarters of Kadıköy and field visits, area next to Bull Square is chosen as site. Site analysis are done about this social space which is located next to Surp Levon Armenian Catholic Church, surrounds the big mulberry tree and which is one of the most important meeting points of the district. With great contribution of volunteer participants, during summer interviews, observations, analyses are done to understand site needs and usages. To make easier following of the process a tumblr account is created.

As second step of the program, at the invitation of Todo Por La Praxis Dilara Kara from HiM and Bihter Çelik from designtrak, also a member of HiM participated to Arquitectos Collectivas X (X Collective Architects Meeting) which took place in Canary Islands on 13-24 July. During the study about improvement of El Risco neighbourhood, inert areas of the neighbourhood are rethought. In this context three main projects were carried out in a participatory process, with great support from dwellers of the neighbourhood and cooperation of collectives. Projects which were applied were; landscaping of the inert land and transformation of the land into a garden, a large mural art work about neighbourhood’s problems and design of a sport field.

El Risco Gymnasium Project is carried out with Herkes İçin Mimarlık, designtrak, Todo Por La Praxis and Pico Colectivo without any exterior labour support in consideration of one-for-one production principle. For the inert area where children from neighbourhood play ball, a place for children and youths can spend time and elders can rest is established. During the design decisions process, neighbourhood dwellers were asked questions such as do you need a sitting area, will it cause a problem if children spend time here, if we do planting, can you water it etc to get their opinions in each step. Design process have continued during the construction process, project documents (technical drawings, modelling etc.) were renewed through the process. Information about metal-wood cutting, grinding and soldering techniques were also given throughout the application process of the project, which is carried out with metal box profiles and a small amount of wood. The stairs which provides access to project area were repaired and painted. Besides participants from collectives, neighborhood dwellers who have realized the work contributed to project by working voluntarily.

Through the process that Arcquitectos Collectivas X carried out, besides project design and application almost 60 collectives made presentations about their own works.

As RE_Lab’s  final step, the construction project in Istanbul called ‘at Bull (Boğada)’ is carried out with aim of improving the waiting/sitting area of the mulberry tree in Kadıköy Altıyol. Following the result of the analysis studies that started in May, it has been decided to seek a solution for the inadequacy and uselessness of the sitting units in the area which is used intensively during the day. After the open call which is done at the beginning of September, ‘At Bull’ project is carried out on 9-15 September with voluntary participants, HiM, Todo por la Praxis, designtrak and Repairs Club. Before the application, participants were trained in welding, grinding, iron and wood cutting in the workshops of Kadıköy Municipality. Then, again in these workshops urban furniture is produced with participants without any exterior labor help. The first prototype designed by metal box profiles and wood is tested in the square during a day and user’s reactions are observed. As comments of users were positive, variations which base on the first prototype were developed. Urban furniture which was produced on 15 September is settled on the site and after the landscaping, renewed space is opened. 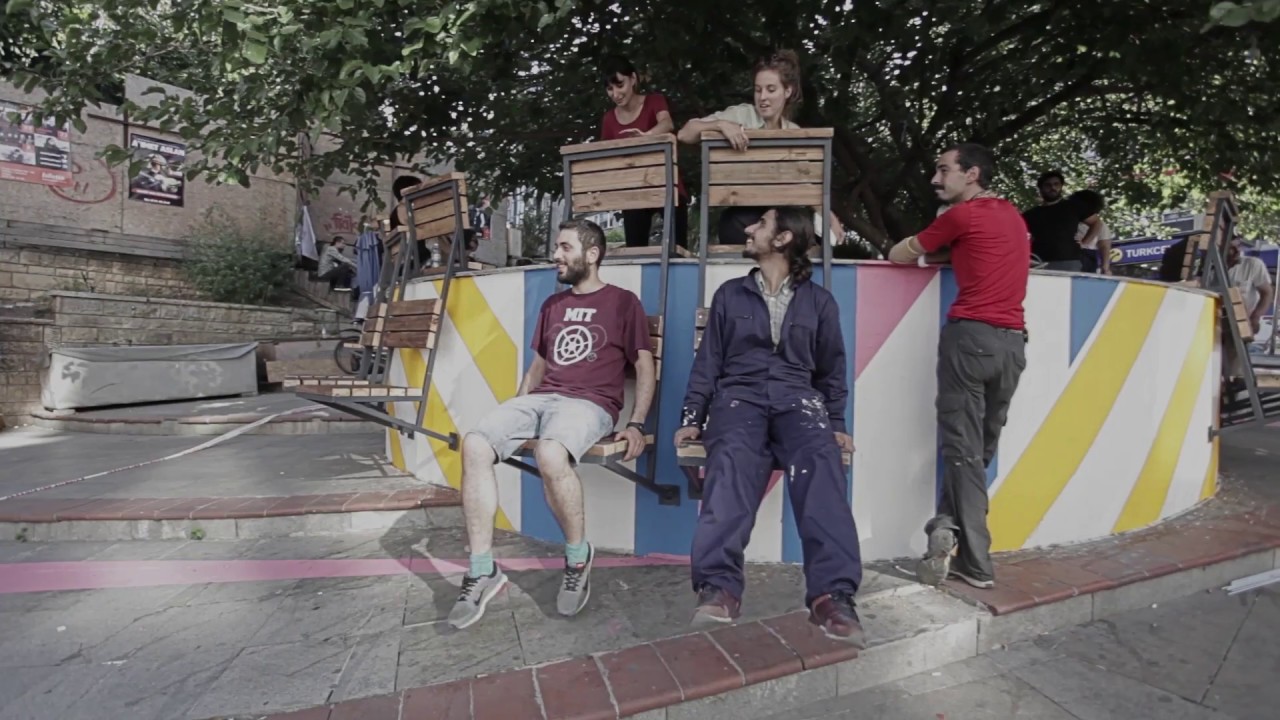