For whom: İzmir Ödemiş Ovakent Village, mentally disabled students from Ödemiş Region
With whom: University and high school students
When: 2014

We started with the workshop work which took place with the participation of İzmir Işıkkent College students on 17-18-19 June 2014 for the renovation and re-functioning of the Abandoned Rural Schools Project-Ovakent. With the guidance of İzmir Provincial National Education Directorate and National Education Directorate of Ödemiş District, the building was decided to be refurbished as a vocational school for mentally disabled children. The school will be ready for the new academic year with the workshops to be carried out while construction works will follow the studies that started with this workshop.

The workshop started on 17 June with the cleaning and re-arrangement of the school garden. First, a work area was created in the garden with materials such as scrapbooks and a writing board taken from the school building. That was followed by removal and stacking of materials to be used in the arrangement of the garden such as cleaning of wild plants and stones, revealing the existing road tracks, breaking of concrete and asphalt pavements required and leveling the landscape where there was elevational difference as a result of unused soil stacked. Scrap tires, wooden pallets and marble pieces were brought to the work site and categorized. Later Işıkkent college students were divided into two groups as the gardening and wall teams. Each team met with the project executives of the association in order to learn the works to be done, and they learned about the materials to be used and about the design process. While the gardening team tried to figure out how to organize the area using materials coming to the land, the wall team began to debate on the patterns to be applied to the surface on the wall. After high school students left the scene, HiM members conducted experiments on the application of the ideas refined and revised from discussions on the design by association members.

On June 18, design ideas on the wall and the garden started to be applied on the walls and the garden. While the areas between the guide lines drawn on the wall were painted by the wall team, the polishing of wooden pallets to be used in the garden and the painting works of the scrap tires were done by the gardening team. Situated on the corner of the garden, an old fountain was cleaned and plastered, making it ready to paint. On the way to the entrance, starting from the pedestrian access door of the school, the pits formed due to various modifications were repaired by pouring concrete into them. On the area surrounding the effigy of Atatürk, plants were pruned, and wild plants and debris were removed. The logs, which would form one of the borders of the designed garden area and prevent the spreading of the pebbles, were carried to the area and fixed to their places. After the completion of the second paint layer on the walls, all participants began to spread the first layer of pebble layer, which would cut off the direct connection of the wooden pallets to the soil. Ongoing work continued during afternoon supported by the inhabitants of Ovakent who provided equipment, materials and workforce assistance. After the high school students left the field, we continued to work, painting and polishing the railings of the stairs to the entrance and painting & polishing of the remaining tires and pallets.

After the distribution of the participation certificates, this stage of the Ödemiş Ovakent project was terminated with collective photo shoots. 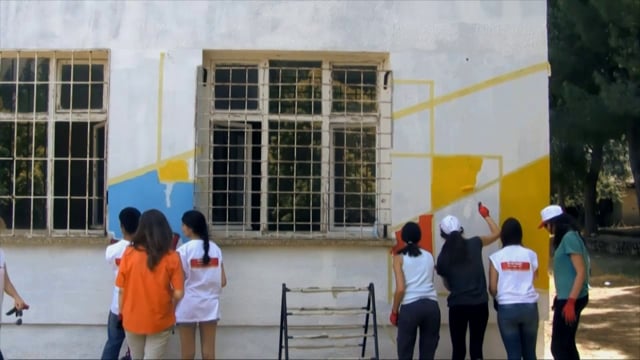