Within ‘The Performance of Modern: Atatürk Kültür Merkezi’ exhibition, as a part of ‘Workshop Series: Imagine, Design, Discuss’ two workshops named ‘Racecourse’ were carried out on Tuesday 23 October 2012 and on Saturday 22 December 2012.

Emre Gündoğdu, Hayrettin Günç and Samim Magriso from Architecture for All team were coordinators of the workshop that 18 2nd grade high school students participated. Students worked as 4 groups. Atatürk Cultural Center’s (AKM) façade was represented on a cube and students designed systems that will allow one or more ping-pong balls to move on the surface for the longest time. ‘Trackr’ workshop which was inspired by ‘Rube Goldberg Machine’, on one hand allowed students to have the opportunity of thinking about topics such as the material’s gathering possibilities, connection details and on the other hand establishing a relationship in a different context with AKM’s façade that is reflected every day to urban life. 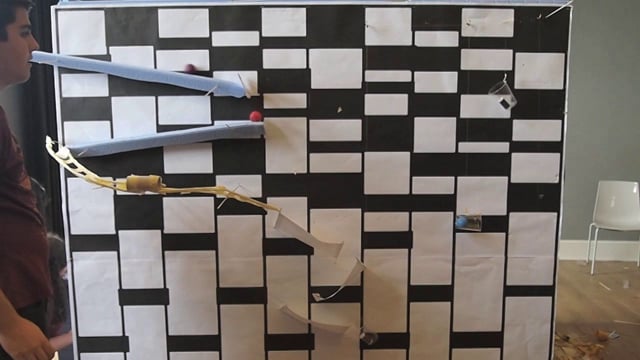