On 7th and 14th May 2017 we organized a workshop named “1 Teacher 1 Discipline #Architect” with Öğretmen Ağı (Teacher Network) and teacher Şirin Giyik. Studio-X Istanbul hosted a two-staged workshop on the question of ​​”what can teachers produce together with other disciplines” that the Öğretmen Ağı has been thinking over.

The two organizations came together when Öğretmen Ağı wanted to gain different perspectives with another discipline. At the preparatory meetings, we set the goal of the study as “to raise awareness of teachers about architecture and architects”. We decided that instead of a one-day workshop it would be good to concentrate on the subject in two consecutive meetings. And these meetings should be intended for thinking and developing a critical perspective on this area rather than gaining a skill. Instead of a one-sided data transfer, we used the methods such as discussion and co-production.

The first workshop where 11 teachers participated, started with a warm-up game directed by teacher Şirin, following a short talk on Öğretmen Ağı and our association. After a quick debate about “What do architects do?”, we talked about architectural production varieties through some concepts such as necessity, small intervention, informality, collectivity and participation with the help of various images. In the second part of the discussion, we talked about the relationship between space and belonging through the concepts of personalization, partnership, ownership, usage and transformation. After their actively involved discussions, participants were separated into three groups. Each group worked on a three-dimensional collage study on a model of Tunel Square in Beyoğlu, which we gave as a base. At the end of the day, we shared our opinions on the public spaces they designed. We completed the first day, asking them to take three pictures with the theme of “space and belonging relation” in order to speak at the second workshop.

We started the second workshop with the games prepared by teacher Şirin and the discussions on the photographs taken with the thought of the first work together. With a presentation of some architectural examples on educational buildings, we tried to question what kind of changes could be made by spatial interventions in the classroom and school. After that, the teachers were divided into three groups and assessed the concept maps they created on the common space. Then we discussed common space with concepts such as publicity, privatization, temporality, differentiation, originality, unity and openness through some images. After deeply thinking and talking about “space-belonging relationship” and “common space” with different tools throughout the two workshops, the groups first made a relationship diagram for their educational places in their ideals. Later, pipette, cotton, needle, yarn and similar materials are used to produce models of these spaces. The workshop ended with the completion of the evaluation forms after the narration and interpretations of the models.

We left behind a delightful work through efficient discussions and productions with teachers during preparatory studies and at both workshops, where ideas were shared and new concept relations were established. We would like to thank Öğretmen Ağı, Şirin Giyik and all the participating teachers who will continue this series of workshop with other disciplines in the future. 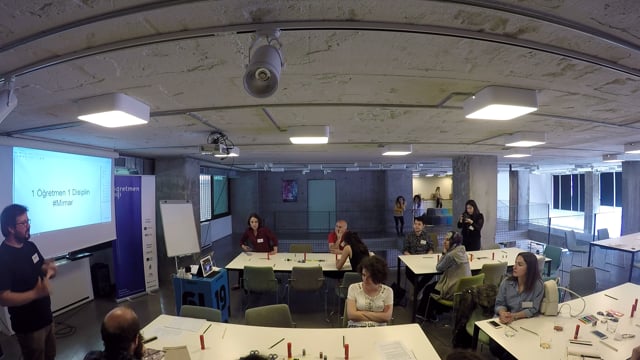