We carried out a workshop called “Collage Act” in Üsküdar Kerem Yılmazer Stage together with Okan University Brokoli Student Group as a part of IBBŞT 33th Children’s Festival.  15 students, from Zeynep Kamil Elementary School 2-A Class participated at the workshop, designed new collage acts based on the old drama posters and staged their acts in front of the decorations they designed.

The workshop started with predicting and understanding the stories of the acts over the old drama posters of IBBŞT. When trying to predict the stories understood from the posters, we tried to draw attention to the design of the posters and what they wanted to say through the designs. The characters in the  posters were discussed.

After that part, three groups were separated and all the banners and brochures collected started producing new stories. At this stage, collage-stories were fictionalized by imagining new situations that would arise when the main character in the selected act and the side character in another act come together, in a new or parallel universe. The groups convey their stories, through collages with characters that they cut. After the collage work was finished, these stories were told to the other groups.

The final stage of the workshop was built on these stories. Cardboard boxes, fabrics, colored paper, spools, etc. were used to design and create physical spaces, clothes and tools to represent the stories of each group. Following the production of the décor, short rehearsals performed by the groups. The workshop ended with the staging of the “Good Palace, Bad Palace”, “Macbeth’s Evil” and “Mysterious World”  by the workshop participants.

We thank Derya Yıldırım and Istanbul Metropolitan Municipality City Theater for inviting us to conduct a  workshop after the “Event Scene” workshop we performed in the festival 5 years ago. 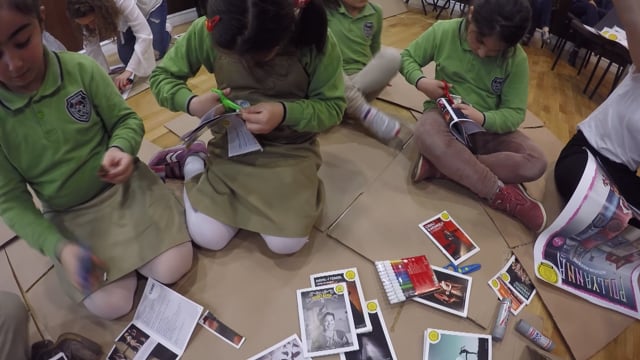