We held a workshop together with Mülteciyim Hemşerim organization in Yarımburgaz Neighborhood Conservation and Solidarity Association on 29-30 October 2016 with the participation of Syrian and Turkish children who live in Yarımburgaz. In the workshop “Look at Me, Catch My Movement, Let’s Make a Story”, which includes portrait, paintings on the body and collage work, children between 4 and 14 years of age have made productions individually and collectively.

The first day of the workshop, which started with the introduction speech and the preparation of name badges, we performed the drawing exercise that we gave the name “Look at Me”  with the participation of 20 Syrian children. In this study, they tried to draw the portrait of the person sitting opposite to them on a A4 white paper without looking at the paper at all. After a few attempts, the portrait work was done on A4 transparency paper by holding it on person’s face and then conveying facial lines on the paper.

After the portrait works were done, we started with the second work of the first day, “Catch My Movement”. First, the volunteers (the puppets) tried to perform on the prepared stage the movement commands given by the rest of the children. After the experiments, the commands of holding umbrellas and opening their arms in different directions were common poses, and volunteer puppets remained in these positions for a while. After several experimental sketches,  the rest of the group transferred this scene on white papers. After the photographing of the works, it was the end of their first day of work that lasted one and a half hours.

The second day of the workshop took place with a group of around 30 people with the participation of Turkish residents of Yarımburgaz alongside the Syrians. The second day work “Let’s Make a Story” started with the production of individual characters using metal wires. The children named their characters and described them to the rest of the group. Later, the minors and the elders are divided into two groups. The minors worked on four different large sized paper, while the elders worked on two long roll paper. In the group of elders, a continuous free line was drawn first. Later they created a story by drawing and painting around this main line. The story line was sometimes a mountain representation, and sometimes it was a fish. Then, they set up their characters on their drawings, and in the last part they completed their stories with a collage work. On the long roll, while everyone was working on her individual story in her field, they also interacted with the story on their side and performed a collective work. The group of the minors also made drawing, painting and collage work around a line, however with a more free-style. We finished the work by saying goodbye to the children after hanging 3 of the produced drawings on the walls.

During the two-day workshop, we aimed a collective production as well a gathering of Syrian and Turkish children of Yarımburgaz in person and body in order to share and communicate. It was an important experience for us to be with them, to think together and to understand the conditions in which they are living.

We would like to thank Mülteciyim Hemşerim organisation who invited us for the workshop and all the children we worked with in the workshop together with Yarımburgaz Neighborhood Conservation and Solidarity Association. 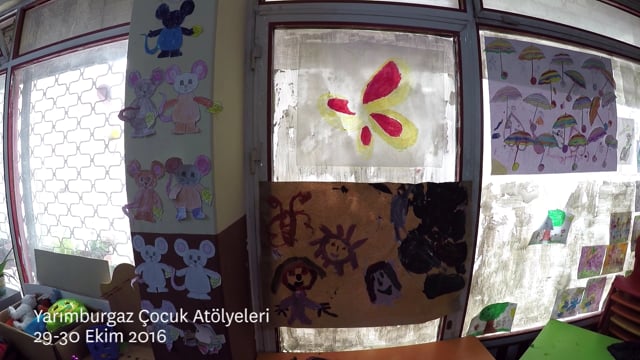