We carried out the second workshop with children from Syria and Turkey living in the neighborhood of Yarımburgaz on 29 January  2017, with the organization by Mülteciyim Hemşerim and Yarımburgaz Neighborhood Preservation and Solidarity Association.

The theme of the workshop was ‘cocoon and shell’. The workshop started with the screening of an animation about metamorphosis. Then, with the participant children we developed ideas on the images of the living creatures going through the process of metamorphosis in their cocoon and plants and animals with shells.

This brainstorm helped us think about the space of one’s own. Predicted by the workshop coordinators, the issues of understanding the borders of one’s own space and raising awareness on the relationship of body and space, were transformed by the children into the relationship between the self and his/her own house.

Children, alone or in groups of two-three, designed their own shells with the cardboard boxes and other materials provided. They collaborated attentively. Some shells could house three-four children whereas some could house only the small imaginary creature the child created. Some were designed as an additional body part that one could wear, and some were designed as a miniature house that even had a garage. We looked inside the houses through the window which could houses only one person, we had our imaginary tea and ate our model ice-creams in the shells that more than one person could fit in. At the end of the workshop children went home wearing their shells.

In the workshop, together with the children, we tried to come up with details for joining different materials we had like cardboard, foam rubber, cardboard rolls, etc., using paper tape, double-sided tape, plastic cable tie and rope. By working in groups children experienced organizing around a main theme, generating original ideas, and common use of the materials provided. Together we researched on the borders of one’s own space, how we define these borders and how we establish relations in an unfamiliar environment.

Thanks to the Mülteciyim Hemşerim Solidarity and Yarımburgaz Neighborhood Preservation and Solidarity Association for inviting us for the workshop and many thanks to the children we worked together joyfully. We have learned a lot, again.

The photos of the workshop is available here. 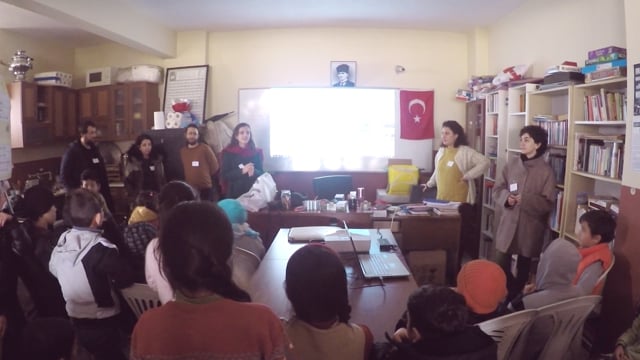